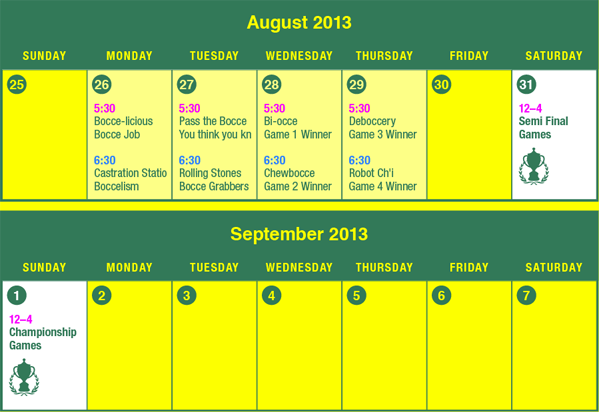 It’s going to be a long week of bocce!

First I’m happy to announce the final rankings which you’ll see posted in the right sidebar of this site. These ranks were generated by meticulously reviewing all the data from the regular season, which included wins, losses, played games and individual match wins (in the event of stat ties). Congratulations to everyone on a terrific bocce season! Considering how many rain-outs we had to endure there didn’t end up being too many missed matches.

Now as for the tournament is concerned, I must admit that I messed up when configuring time allotted for the final games. Unfortunately I used a bracket that only fit the number of teams in the league last year which was 4 less than what we have this year. This means that we’re going to have to squeeze in two extra days (4 games) into the schedule this week in order to keep up on track for the weekend finals.

Here’s how it’s going to work:

The top 8 teams will automatically move on to the 2nd and 3rd round of semi-finals, with teams ranked 1-4 having two byes and teams ranked 5-8 having only one bye. This leaves the bottom 8 teams to face off, with the winners of each match moving on to face the teams waiting in both next rounds. This is a single elimination tournament which means if you lose you’re out.

I know this is sort of short notice for you to get a whole team together for each match. I really hope that you’ll all be able to participate. As always having at least 3 or 4 players for each match is ideal however I’ll be hanging around every day and know we can probably pick up a couple of other local boys / girls to be alternates if need be.

You can keep an eye on the playoff bracket here.