First off I got to say that semi-final week rocked! There’s nothing better than putting a exclamation point on the season like was done in last night’s game between bitter rivals (sort of) Danza and Chewbocce. I honestly don’t think I’ve been more on the edge of my seat since I went to see Piranha 3D in the theater like 6 years ago. Anyway congrats to the 4 teams moving on to the final round, who we’ll see once again this Saturday! Here how it’s all going to shake down: 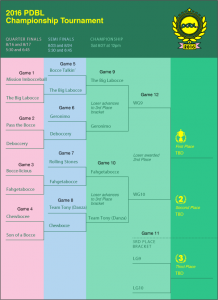 As per usual we’ll conclude with a short medal ceremony where the champion will be crowned the 2016 PDBL Champ!

Thanks again to everyone who showed up to play, and all of the team captains for making this year one of the best years we’ve had to date.  It really was an awesome year of downtown bocce and you guys are really the only reason why I continue to organize, so thanks so much for your enthusiasm and encouragement. If you’re looking for something to do on Saturday afternoon, please come down and check out the games! I have a feeling we’re in for some really juicy competition with these final 4 teams. As for everyone who will be there, get ready to bring it on as only one team can survive the onslaught that is about to begin!